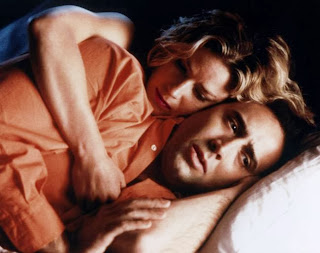 Netflix giveth, and Netflix taketh away. Passing into Instant exile—if not downright oblivion—are a number of significant titles, including a couple of Oscar winners and a handful of movies previously spotlighted here. Taking the hit are such stalwart directors as Howard Hawks, John Carpenter, Barry Levinson and Mike Figgis, as well as stars Kevin Costner, Kurt Russell, Dustin Hoffman, Ashley Judd, Burt Reynolds and Nicolas Cage. Not to mention James Caan and those pesky Bond films...

Speaking of Caan, it seems the original Rollerball—reviewed here as a new title only last week—was simply on a one-month streaming loan. As of August 31 at midnight, it will once again be skating off into the distance. Thanks for the tease, Netflix.

Also on loan were those eternally recurring James Bond films, which arrived on 8/1 and will be departing on 9/2. At this rate I suppose we can hope for another return in the near future? I've only been tracking these titles since April, so I'm not sure how regularly such shenanigans occur.

Other titles previously recommended are the dark, fictionalized(?) biopic of game show producer/assassin Chuck Barris, Confessions of a Dangerous Mind (review)—written by Charlie Kaufman and directed by George Clooney—and the wonderful coming-of-age comedy, Slums of Beverly Hills (review), with Natasha Lyonne as a brashly curious teen growing up with her nomadic family in 1970s Los Angeles. (10/1 Update: Confessions is now back!)

That brings us to this month's new expiring entries, starting with a couple of notable Oscar winners.

Read more »
Posted by David Speranza at 1:56 PM No comments: Links to this post

Among the notable titles joining Netflix Instant this month are a stellar example of '70s sci-fi, the Spike Lee joint of Spike Lee joints, an underrated drama from the writer-director of personal fave The Fabulous Baker Boys, Christopher Nolan in his more forgetful, pre-Dark Knight days, and a bit of unabashed filth from the mind (and groin) of Kevin Smith. 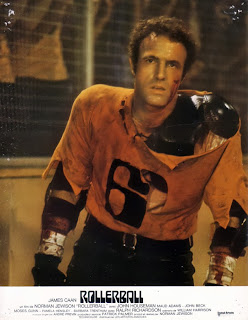 Once upon a time, in a decade far, far away, science-fiction movies were built on ideas, not special effects. Before Star Wars changed the rules (and box-office expectations), all you needed to make a sci-fi flick were a respectable actor (say, Sean Connery or Charlton Heston or Robert Duvall), a script with some cautionary message reflecting the day's concerns, a newly built, futuristic-looking mall or campus as your setting, a few cool-looking props and/or model space ships, and maybe a miniature of a domed city. Presto—big-screen dystopian future. Those were the days of Zardoz, Logan's Run, Soylent Green, The Man Who Fell to Earth, and THX-1138, among others. Granted, most are not what you'd call "great" films, but they're all provocative and idiosyncratic (and flawed) in ways that give them an organic charm—something sorely missing from today's machine-stamped blockbusters. Even Rollerball—which posits a future run by benevolent corporations who keep the peace by pitting nations against each other in an internationally sanctioned blood sport—alternates its bursts of violence with hushed, meditative talks about free will and human nature (as well as the random burning of trees as party trick).

Read more »
Posted by David Speranza at 11:49 AM No comments: Links to this post

Slippery When Wet: THE ICE HARVEST 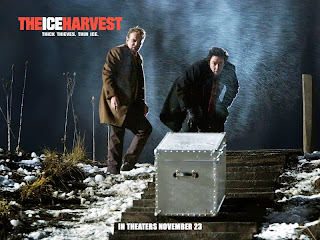 This advice, dispensed to Charlie Arglist (John Cusack) by partner-in-crime Vic Cavanaugh (Billy Bob Thornton), is, of course, the crumbling bedrock on which many a crime film is built. And yet Cusack's weak-willed mob lawyer, who along with shady businessman Vic has just ripped off Charlie's boss to the tune of $2 million, truly believes in the perfect crime. As he explains in The Ice Harvest's opening narration, pulling one off is "only a matter of character."

But character is in short supply where Charlie is concerned. Waiting for the city's icy roads to clear before he and Vic can hightail it out of Wichita, Charlie spends one of history's most depressing Christmas Eves laying low at a favorite strip club, acting anything but normal. It's not long before he's dragging behind him a trail of interested parties, including mob enforcer Roy Gelles, strip club owner Renata Crest, an ass-kissing cop, a favor-seeking politician, and Charlie's drunken buddy Pete (Oliver Platt), who happens to be married to his ex-wife. Meanwhile, Vic is no longer giving Charlie the warm fuzzies about their shared plan, adding to his growing paranoia.

Read more »
Posted by David Speranza at 1:20 PM No comments: Links to this post 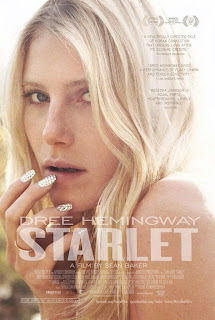 There's a new kid in town, and she comes with a distinguished pedigree. Her mother is Mariel, who starred in Manhattan with Woody Allen. Her aunt was Margaux, a model and actress. And her great-grandfather was Ernest, known to have scribbled a noteworthy novel or two. This latest Hemingway goes by the name of Dree, until now a model herself but making an impressive acting debut in Starlet (2012), an unusual, carefully observed indie drama that snuck in and out of theaters before many people (myself included) could notice it.

Resembling a lanky cross between her mom and Bridget Fonda, Hemingway plays Jane, an apparently aimless beauty existing on the fringes of L.A.'s San Fernando Valley with her small dog and a pair of sketchy pothead roommates. After acquiring an old thermos at a yard sale, Jane finds herself compelled to learn more about its former owner, an ornery 85-year-old widower named Sadie—played with prickly impatience by Besedka Johnson (in her only film role before passing away earlier this year).

Read more »
Posted by David Speranza at 12:32 PM 2 comments: Links to this post

And Once Again... Bond Is Back

James Bond has returned to Netflix Instant in August. How long he'll remain is anyone's guess. [Not very long, it turned out.] The good news is, unlike the last time the erstwhile spy reappeared, now pretty much all the pre-Daniel Craig films are available. That includes the two dark horse entries, On Her Majesty's Secret Service (1968), and Connery's "unofficial" 1983 return, Never Say Never Again. The latter I remember liking quite a bit--save for the crucial absence of Monty Norman's iconic Bond theme—and I still think Klaus Maria Brandauer's Largo was the most nuanced and complex Bond villain until Javier Bardem in Skyfall.

Herewith, an updated repost of an April look at select Bond titles, including two all-new entries. I may add more as I rewatch them—assuming they don't disappear again at the end of the month!