As with every month, it's time to say goodbye to some exceptional titles that will no longer be streaming on Netflix. This time around, those among the fallen include Wes Anderson, the Coen Brothers, Woody Allen (again), Sam Raimi, a Best Picture winner, a sci-fi sleeper, and two of Francis Ford Coppola's most interesting, least-seen films (along with one of his best). Oh, and Jack Nicholson playing faux Jimi Hendrix in a ponytail. 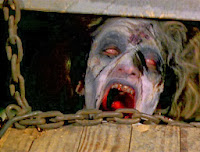 If this wasn't the first of the "cabin-in-the-woods"-type horror films (it wasn't), then it certainly helped codify the rules for such movies, igniting a mini-franchise for first-time director Sam Raimi, a cult following for star Bruce Campbell, and a subgenre that's been exploited to the point of post-modern excess (see: Joss Whedon's giddily entertaining The Cabin in the Woods). Sure, Raimi's budgets and technique would improve exponentially in the years to come, but there's no mistaking his ghoulish glee at mixing horror, humor and gore with founts of foul, unidentifiable fluids. We'll consider it a sick joke on Netflix's part that this movie expires at midnight on Halloween. Meanwhile, Evil Dead 2 remains available if you're still looking for something gooey and dangerous to lock in your cellar. Trivia note: We all know the heights to which Raimi's career eventually reached (can you say Spider-Man?)—but did you know The Evil Dead's young assistant editor was none other than Joel Coen? Speaking of whom...

Read more »
Posted by David Speranza at 1:30 AM No comments: Links to this post