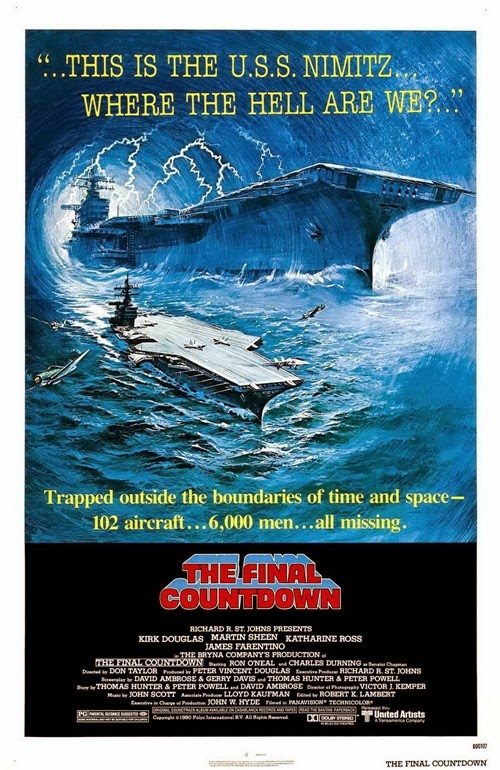 The Final Countdown was completely off my radar when it cruised into theaters back in 1980. That may have had something to do with a little film called The Empire Strikes Back, which all the kids were scrambling to see. It also may have been due to Countdown's stars—Kirk Douglas, Martin Sheen, and Katharine Ross—not being the sort to lure my younger self into theaters. Add in the lack of wham!-pow! special effects or the interstellar scenery Hollywood was already making all the kiddies crave, and my lack of awareness is even more understandable.

But the fact that I didn't discover this smart, ambitious science fiction film until now I lay squarely at the feet of that awful 1986 song of the same name (whose shrill, hair-band chorus makes me shudder in embarrassment for the entire decade). Because as it turns out, The Final Countdown is an admirable attempt at the kind of time-travel scenario found in an early Twilight Zone or Star Trek episode (such as "The Last Flight" or "Tomorrow Is Yesterday," for those in the know).

The movie's central premise is simple: What if a modern-day aircraft carrier slipped through time and found itself in the waters near Pearl Harbor, on December 6, 1941—the day before the Japanese attack?

Read more »
Posted by David Speranza at 9:23 AM No comments: Links to this post

Still haven't watched the 1950s suburban zombie flick, Fido? What about Peter Bogdanovich's classic 1973 comedy, Paper Moon (reviewed here)? Or the darkly imaginative The City of Lost Children, from the duo who created the brilliant Delicatessen? If not, you better get to it, because those and other recently added titles are about to expire, including one of the better entries in the Star Trek series, Star Trek VI: The Undiscovered Country (which arrived only this month, in case you're feeling a sense of deja vu).

You may also want to get cracking on a number of other new-ish titles already earmarked for the big sleep, such as the two ZAZ* comedies, Airplane! and Top Secret!, which redefined big-screen zaniness in the 1980s; Mel Gibson's Braveheart, which helped redefine movie violence in the 1990s; and 1969's Easy Rider, which redefined youth culture, the movie industry, and Jack Nicholson's career, all in one smoke-filled swoop.

Read more »
Posted by David Speranza at 9:10 PM 3 comments: Links to this post

The Joy of Conversation: STUCK BETWEEN STATIONS 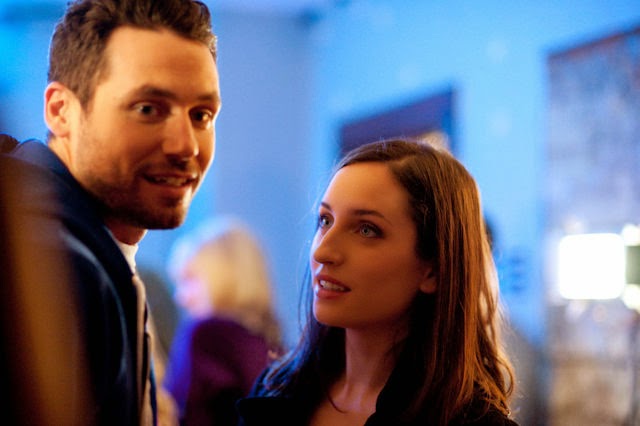 There are a lot of obscure indies lurking in the recesses of Netflix Instant, many of which, sadly, are forgettable exercises in predictability (how many tragic tales of junkie strippers do we really need?). So it's a real treat to find one as accomplished and entertaining as 2011's Stuck Between Stations.

Taking place over a single night in downtown Minneapolis, the film follows two former high-school acquaintances (Sam Rosen and Zoe Lister-Jones) getting to know each other as each confronts a personal crisis.

Casper, a U.S. soldier on leave from Afghanistan, is home for a few days to deal with his father's death. Meanwhile, graduate student Rebecca faces the messy blowback of an affair with her comparative-lit professor (played by Michael Imperioli). It's been ten years since these two last saw each other, and a mix of curiosity and attraction finds them wandering from one nocturnal gathering place to the next—a bar, a party, an indoor circus, a convenience store, an empty playground. Between encounters with a handful of other characters, they catch each other up on where their lives have taken them and what kind of adults they've become.

Read more »
Posted by David Speranza at 8:21 PM 3 comments: Links to this post

July Highlights: Slow on the Update 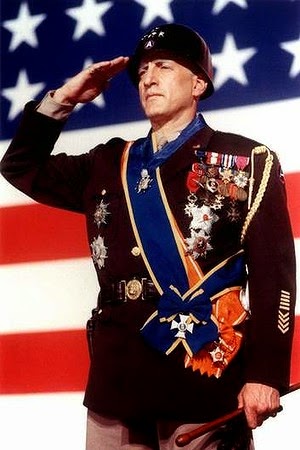 No two ways about it: there were some pretty good additions to the streaming catalog this month (even if it's taken me longer than usual to note them). I've been finding it tricky to do much more than update the new and expiring lists this summer, but in place of a GONE FISHIN' sign, how about we break down the best of the new titles into more manageable chunks? We'll start with the prestige pics, which include numerous multi-Oscar winners, and work our way through the classics, the so-bad-they're-good, the rewatchables, and the returned. And just to mix things up, we'll put each list in chronological—as opposed to the usual alpha—order.

Patton (1970) - George C. Scott kills it as the erstwhile general, in an Oscar-winning script by Francis Ford Coppola
On Golden Pond (1981) - Jane and Henry Fonda team up with Katherine Hepburn; a bit mawkish but well-acted and beautifully filmed
Sophie's Choice (1982) - Meryl Streep in the first of her many world-changing performances
Gandhi (1982) - Richard Attenborough directs Ben Kingsley in this epic Oscar-winning tale
Eight Men Out (1988) - John Sayles guides a stellar ensemble cast (John Cusack, David Strathairn, Charlie Sheen, Christopher Lloyd) in this understated, intriguing account of the infamous "Black Sox" Scandal
Philadelphia (1993) - Tom Hanks shows he's serious, nabbing his first Oscar for Best Actor in Jonathan Demme's AIDS drama, which also stars Denzel Washington
Dead Man Walking (1995) - Sean Penn, Susan Sarandon, more Oscars
City Of God (2002) - Searing, must-see drama set in the slums of Rio de Janeiro, filled with incredible filmmaking and unforgettable performances by a non-professional cast
Venus (2006) - Peter O'Toole in a late-career performance as an aging actor who finds himself falling for a young model. But will she fall for him back?
The Master (2012) - Joaquin Phoenix, Philip Seymour Hoffman and Amy Adams all got nominated for Oscars in this latest exercise in intensity from Paul Thomas Anderson (Boogie Nights, Punch-Drunk Love)

Read more »
Posted by David Speranza at 2:01 PM 2 comments: Links to this post